The Indonesia Ocean Justice Initiative (IOJI) considers illegal fishing and threats to sovereign rights as key challenges to the development of Indonesia’s sustainable ocean economy. As stated in the Indonesia Marine Policy Track Record 2021 & Projection 2022, report published by IOJI, these threats potentially hamper national efforts to provide effective protection to biodiversity, critical habitats and restore ocean health. A healthy and well-protected ocean is a prerequisite for the sustainable production of the ocean and equitable prosperity.

The Detection Of Vietnamese Fishing Vessels in The North Natuna Sea Throughout 2021 (Source: AIS and ESA Sentinel-2)

Throughout 2021, IOJI detected incursions of foreign fishing vessels into Indonesia’s maritime territory, particularly the North Natuna Sea (Fisheries Management Area/FMA 711), Malacca Straits (FMA 571), Indian Ocean west of Sumatra (FMA 572) and Sulawesi Sea (FMA 716). Of those areas, North Natuna Sea is most vulnerable to the illegal fishing of foreign fishing vessels, particularly from Vietnam. Threats of illegal, unreported and unregulated (IUUF) took place in the overlapping claims of the Exclusive Economic Zone (EEZ) between Indonesia and Vietnam (disputed)  and undisputed areas. Indonesia and Vietnam have yet to agree on the delimitation of the EEZ. The biggest incursion of Vietnamese fishing vessels in the North Natuna Sea last year was in April 2021 when 100 Vietnamese fishing vessels were detected within a 110 square-kilometer area at sea or equivalent to one vessel for each sq km.

IOJI suggests that the Coordinating Maritime Affairs and Fisheries Ministry, Indonesian Navy (TNI AL), Maritime Security Agency (Bakamla) and the National Police increase coordinated patrols in the center of the illegal fishing cluster in the Natuna Sea. Article 64 of Law No. 32/2014 on maritime affairs mandates that the president issue a national policy on maritime security and safety. Furthermore, the Foreign Ministry needs to accelerate efforts to conclude EEZ maritime boundary agreements and provisional arrangements with the Vietnamese government as guided by the United Nations Convention of the Law of the Sea (UNCLOS).

Threats to Indonesia’s sovereign rights in the North Natuna Sea in 2021 were also posed by Chinese vessels: fishing vessels, Chinese Coast Guard vessels, geological research/survey vessels and even military vessels (People’s Liberation Army Navy) from May to November 2021. The intensity is considered to be higher than that in previous years. According to IOJI, these threats constitute parts of China’s political strategies in the region in advancing its nine-dash line claim. The nine-dash line claim itself is unlawful under  international law, as concluded by the Permanent Court of Arbitration in the South China Sea Tribunal Award (Philippines/China, 2016). 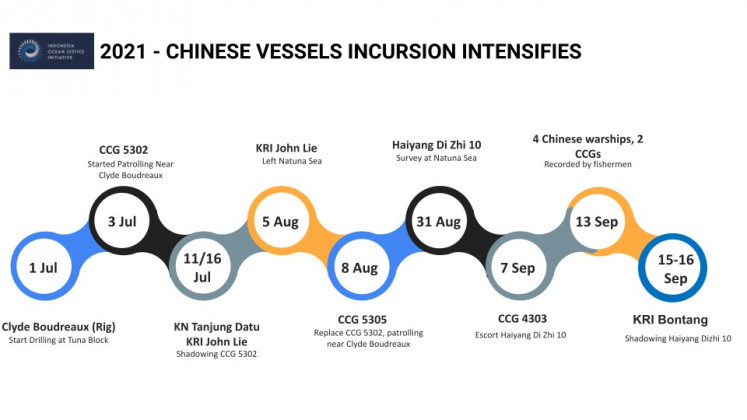 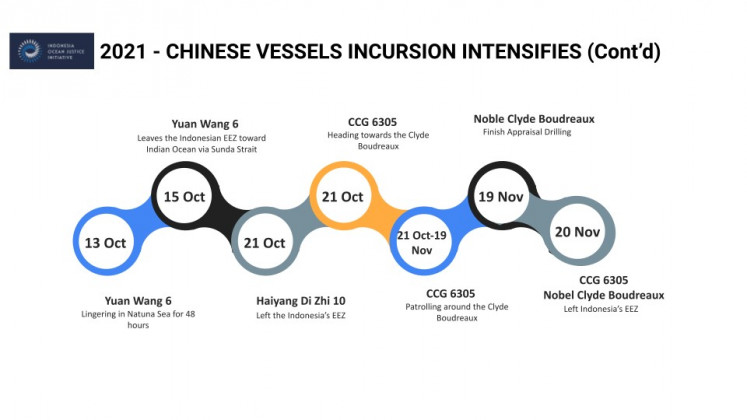 Maritime security threats posed by China in 2021 within Indonesia’s EEZ were unprecedented, as they relate to Indonesia’s sovereign rights over non-living resources. Chinese Coast Guard vessels were detected in the vicinity of the Tuna Block’s exploration activities, operating in a way that harassed the project. In addition, the Chinese government also deployed a geological survey/research vessel, the Haiyang Dizhi 10, to operate in a typical pattern of marine scientific research or even geological survey course. This vessel operated in the vicinity of the D-Alpha gas block, which contains a huge volume of hydrocarbon reserves.

A similar pattern of intimidation was also used by the Chinese government toward oil and gas operations in the EEZ of the Philippines, Malaysia and Vietnam, all of which overlap with China’s nine-dash line claim. Unlike these countries, Indonesia has declared its position as a non-claimant state to the South China Sea disputes, according to UNCLOS 1982. Also, the Indonesian government has consistently delivered its persistent objections to the nine-dash line claims. That being said, China’s assertive and unlawful actions against Indonesian sovereign rights in 2021 reaffirms China’s behavior and approach to international law. That is, the Chinese government does not comply with international law, potentially undermining Indonesia’s commitment to utilizing the ocean sustainably.

Reflecting upon the above mentioned threats, IOJI recommends that the government robustly and publicly deliver its objections to every action of the Chinese government based on the unlawful nine-dash line claims. Three benefits of such actions are as follows: emphasizing Indonesia’s position as the persistent objector to the unlawful nine-dash line claim in the international community, displaying Indonesia’s leadership in ASEAN on South China Sea issues and sending a positive signal to the investment security of resource exploration and exploitation in the North Natuna Sea.

Meanwhile,  the TNI AL and Bakamla need to continuously shadow and expel Chinese vessels that violate and/or pay no regard to Indonesia’s sovereign rights, as demonstrated in 2021.