The results of the research are then outlined in the High-Level Panel report for Sustainable Marine Economy (HLP-SOE) called Blue Paper 15: Illegal, Unreported and Unregulated Fishing and Associated Drivers and Blue Paper 16: Transnational Organized Crimes in Fisheries. Both of these Blue Paper are a part of the 16 Blue Paper produced by HLP-SOE which is a world panel consisting of 14 (fourteen) Heads of Government chaired by the Prime Minister of Norway and the President of Palau. The President of Indonesia, Joko Widodo, is a high-level Panel member. Blue Paper is a scientific research containing the explanation of the cause, effect, and implications of marine and fisheries issues towards economic development and the welfare of countries in the world, as well as assessment and recommendations related to strategic and innovative solutions. The 16 Blue Papers will be used as a basis for developing action recommendations and solutions at the global level for sustainable use of marine and fisheries resources to be launched at the 2nd UN Ocean Conference in Lisbon, Portugal on June 2020.

The Norwegian Ambassador to Indonesia represented Norway as the initiator of HLP-SOE. In his opening remarks’ speech, he expressed his hope that Indonesia could continue to increase efforts to eradicate the practice of IUU Fishing and related crimes so that it could be an inspiration to other countries in the world. In this seminar, the Head of Indonesian Maritime Security Agency (Bakamla) conveyed his view which was read out by the Deputy Operations of the Bakamla, in which underlined the importance of synergy between relevant agencies and institutions in order to strengthen Indonesia’s ability to protect its waters. Head of Bakamla, Vice Admiral of Indonesian Navy Aan Kurnia added that IUU Fishing is a serious threat to food security and the sustainability of fish resources. Bakamla’s role in the context of maritime security is to strengthen its function as a maritime fusion center that works closely with other maritime stakeholders to monitor maritime situations and conduct analyzes. The strengthening of the function is needed in order to build a maritime picture to create maritime awareness that generates early detection data to encourage collaborative response.

This seminar also emphasized the close link between the practice of IUU fishing with various other criminal acts, making the issue of sea security more complex, as illustrated in the two Blue Papers reports. Other criminal acts that often accompany the IUU fishing are human trafficking, slavery, and corruption. Former Vice Chairman of Corruption Eradication Commission (KPK) and IOJI Founder, Laode M. Syarif, explained the potential and practices of corruption that occur in the fisheries sector, both in the preparation process on land and during harvesting at sea.

The Head of Research and Human Resources of the Ministry of Marine Affairs and Fisheries (MMAF), Prof. Sjarief Widjaja, and the CEO of IOJI, Mas Achmad Santosa, as co-lead authors of Blue Paper 15 and 16 revealed various drivers, modus operandi, and action recommendations for states in the effort to eradicate IUU fishing and transnational organized crimes in the fisheries sector. Sjarief Widjaja explained the three main drivers of IUU fishing practices, namely economic incentives in the form of fishery subsidies, poor governance including state abilities to manage various policies under one umbrella, and law enforcement constraints in the form of inadequate monitoring, controlling, and surveillance (MCS) capabilities. Sjarief Widjaja proposed, within the Blue Paper 15, solutions that could be taken to eradicate IUU fishing practices, including adopt global transparency in fisheries, ratifying and implementing Port State Measures Agreement, and enhance regional cooperation.

Mas Achmad Santosa added that the challenges in handling transnational organized crimes in the fisheries sector including: lack of awareness and political will between state leaders, lack of coordination between relevant institutions within the country and between states, uncertainty of laws and regulations, protracted boundary disputes at sea and lack of extra-territorial jurisdiction under national legislation, lack of law enforcement capacity, and the lack of transparency in fisheries management. One of the important recommendations from Blue Paper 16 is to build a common understanding of the existence of organized transnational crime in the field of fisheries by utilizing existing international platforms, such as UNGA, UNSC, UNCCPCJ, the Copenhagen Declaration 2018, OOC, and UN Ocean Conference, which is also one of the main topics discussed by the speakers at the seminar. Besides Bakamla and KKP, the seminar was also attended by speakers from the Indonesian Navy, Marine Police, the International Relations Division of the National Police, and academics. 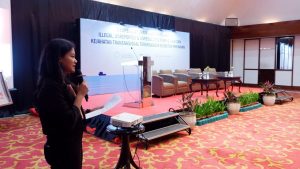